In 1970 the Govett Brewster Art Gallery opened in New Plymouth with Leon Narby’s Real Time – sound and light environment. I was at Inglewood High School were Leon was on teacher placement. The Real Time installation was highly influential for me to want to make Art and attend Elam School of Fine Arts in Auckland.

My introduction to Auckland in December 1971 was living in Ponsonby, working at National women’s hospital and traveling the bus routes. In January 1972 I started working the nightshifts at the Ca d’Oro coffee house in Customs St – a well known haunt for Auckland’s gay and lesbian community. It was also a stop off point for local street workers. I learnt to make “special coffees” and felt completely at home. I started to slowly record what I was part of and saw.

In 1972 I went to Elam School of Fine arts, Auckland University to study sculpture. My first year at Elam was a general introduction – but, my work focussed on sculpural works. I made huge clothes lines of sheets and linen in the feilds at Huia – recording them as the end point.  I took sculpture in my second year and undertook more installation & performance work and made super 8 films. During my time with the sculpture department I developed Cabbage Enterprises  – a pseudo business, with costumes, logos, latex moulds and actual cabbages in the gardens near the studios. I also developed a range of female personae which inhabit early film and photographic work. I also recorded others performances.

In my third year I moved to do Photography and set about to work solely in colour. In 1974 I helped build the first colour darkroom at Elam.

Here is a selection of work from this time. 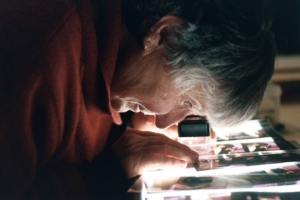